A crowd of police officers gathers around a man who, minutes before, was filming the area around the Capitol with his smartphone. The man is not wearing a mask. He claims to be working for a media outlet but has no ID and the police appear suspicious. After a few minutes, a senior plain-clothed police official arrives, interviews the man for several minutes, and takes his picture. Then the man is released. A misunderstanding.

Uncertainty over what comes next

Situations like that show that police and security agencies in the city are on high alert. An official state of emergency was declared on Monday. Instead of feeling excited about Inauguration Day, fear resides about what might come next after the violent storm of the Capitol last week. The FBI has warned that Trump supporters are planning armed protests ahead of the inauguration in all 50 US capitals. 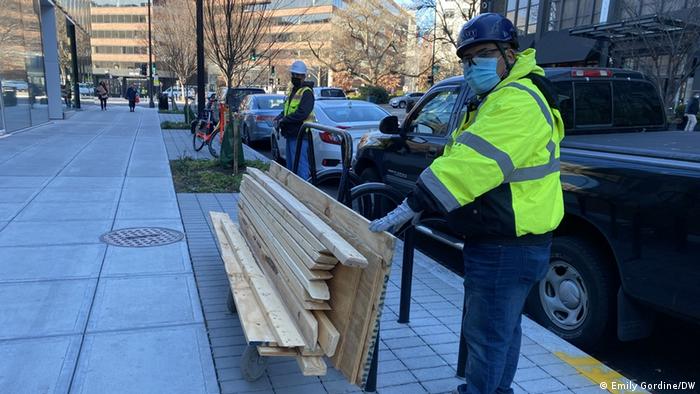 Victor Corso and his colleagues are busy boarding up the shop fronts in anticipation of the inauguration.

Downtown, Victor Corso and his colleagues are busy boarding up the window fronts of the US media outlet CBS.  Instead of Inauguration Day celebrations, businesses are bracing for damages. At the same time, some Trump supporters have put a target on what they call “fake news” outlets. Victor has been in the United States for 12 years and has seen quite a few inaugurations. Never has it been like this, he says.

While business owners all around town are putting up barricades for their protection, the US Capitol is swarming with law enforcement personnel. The Secret Service has officially taken over the security around the inauguration. More than 20,000 National Guard troops have been mobilized for the ceremony. In comparison, at the inauguration of Donald Trump four years ago around 8,000 National Guard troops were in place. Typically, presidential inaugurations enjoy a high level of protection, but this year the events of last week have considerably raised the bar on security. 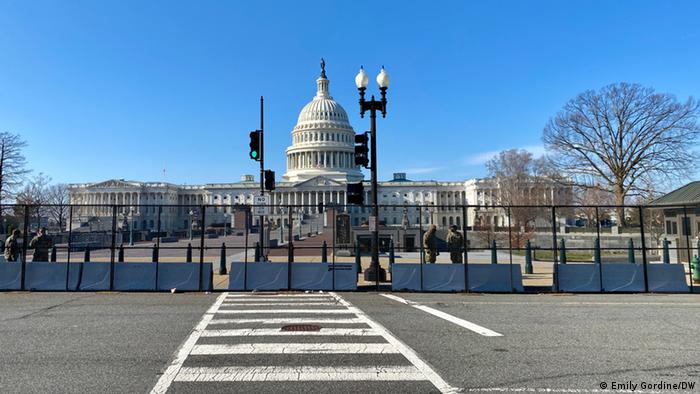 An over 2-meter-high fence was erected around the Capitol.

Around the Capitol, a fence of over 2-meters has been erected and is patrolled by soldiers of the National Guard. Some of them started carrying weapons with live ammunition on Wednesday. Capitol Police roam the streets all around the official government buildings, keeping their eyes peeled for anything suspicious. More and more streets in the Downtown area are being closed altogether with large trucks barricading the way. 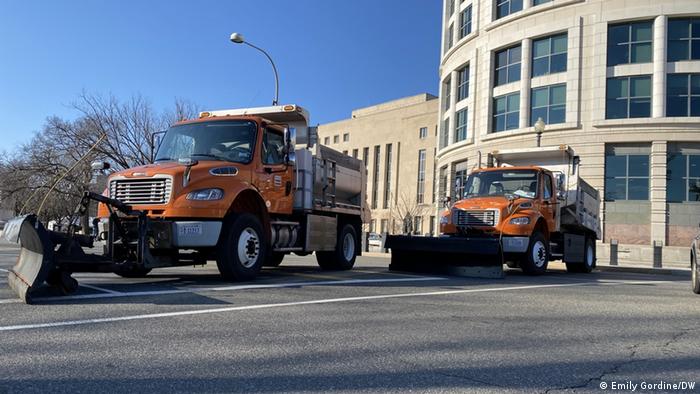 Trucks are blocking the entry into the streets around the Capitol that have been closed by the police.

“I feel safe now, the place looks like a military camp,” says Jim Freund, a resident who lives only a few blocks away from the Capitol. But fear lingers. “There is such deep division in this country and there is so much misinformation being circulated that I think you have to be worried.” The events of last week displayed a “complete failure of preparation” and “should never have happened,” he adds.

The atmosphere is also tense inside the Congress building itself. Pictures show dozens of National Guards soldiers sleeping on the floor, with politicians navigating their way between soldiers’ backpacks and legs. As a new measure, lawmakers now have to pass through metal detectors before entering the House chamber. Some Republican lawmakers have complained about the screening. 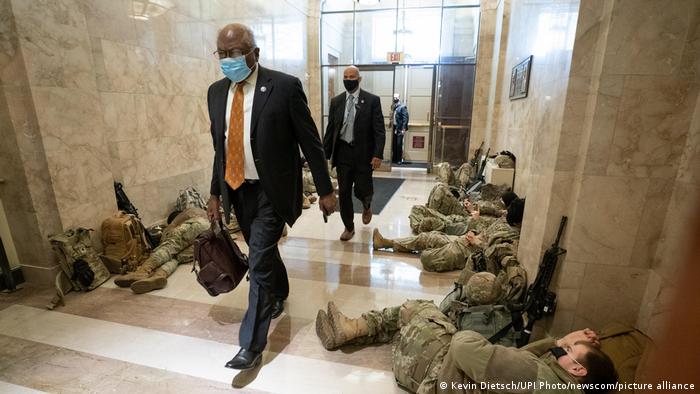 An unusual and disquieting sight for US lawmakers

Authorities are discouraging Americans from descending on Washington D.C. for the inauguration. Amid fears of militant Trump supporters infiltrating the capital, Airbnb has canceled all reservations during the week of the event. Under normal circumstances, visitors from all around the country would visit the capital. When former President Barack Obama was sworn in, around 2 million supporters flocked to the city. This time, also in light of the coronavirus pandemic, the event will be much more toned down.

US President Joe Biden spoke to French President Emmanuel Macron and expressed the US' desire to "strengthen bilateral ties with our oldest ally," the...
Read more
News

SpaceX has celebrated what it described as a record-breaking cargo launch on Sunday. The aerospace company's Falcon 9 rocket successfully transported 143 satellites and...
Read more
News

Portugal's incumbent president, Marcelo Rebelo de Sousa, is on track to win a second term in office on Sunday, after media projections put him...
Read more

CHRIS SUTTON: The Manchester United job was supposedly too big for...
Read more

Beijing claims sovereignty over almost all of the region but this clashes with rival claims from five of its neighbours. The United States rejects...
Read more

The Man United job was supposedly ‘too big’ for Solskjaer but...