Home Tv & Show Sir Ray Davies talks being banned from the US, losing his sister...

TO this day, Ray Davies doesn’t know why The Kinks were banned from the United States for four years . . . just as they were hitting the big-time.

Well, not exactly why. “I hope we did something really bad,” he muses, summoning some of the old mischief. “I expect we did.

“We were unruly but other bands also got up to terrible things which we can’t go into. We got caught.”

Reports of The Kinks’ turbulent 1965 American tour suggest rowdy behaviour on and off stage, an altercation with a TV producer as well as talk of an unpaid fee but no official explanation was ever given.

The excessive punishment meant The Kinks, fronted by Ray (vocals, rhythm guitar) and younger brother Dave (lead guitar), were denied the chance to compete with other British Invasion acts such as The Beatles, the Rolling Stones and The Who in the world’s biggest pop arena.

But at least the hiatus, which lasted till late ’69, allowed Davies to develop his craft with spectacular, if decidedly homespun results.

Cue the reason he’s talking to me – the 50th anniversary of The Kinks’ outstanding concept album, Arthur (Or The Decline And Fall Of The British Empire), a forceful yet wildly entertaining study of the British condition from the Victorian era onwards.

I’m meeting Davies, on a crisp October day in his familiar North London stomping ground at a big house, complete with tea rooms and an art gallery, in Waterlow Park, Highgate.

We find ourselves in a vast upstairs room and, rather charmingly, he’s wearing a little brass Kinks badge on his lapel while sipping frothy coffee from an Arthur-themed mug.

‘AMERICANS DID US A BIG FAVOUR’

Just recovering from a cold, he speaks slowly and quietly but soon warms to the task of our anecdote-filled encounter.

“After the ban, I withdrew into my Englishness, where I’m from,” he says. “So maybe the Americans did us a big favour.

“We probably would have played Woodstock, which by all accounts wasn’t that great.”

Has there ever been a songwriter who taps into quintessential Englishness as perceptively as The Kinks singer?

‘I HAD NO EXPERIENCE OF LIFE OR WRITING’

Now he is Sir Ray, knight of this realm, regarded as a master of songs about the ordinary lives of ordinary people.

He gives these insights: “Our first record You Really Got Me was pure teenage lust and angst . . . boy wants girl, me Tarzan, you Jane. Simple.

“Then I was asked, ‘Will you write more?’ but I had no experience of life or writing, so I did caricatures of people around me from where I grew up (in Fortis Green).

“A Well Respected Man lived next door to me and used to go to work in his bowler hat.

The Kinks made up of Mick Avory, Dave Davies, Ray Davies and John Dalton[/caption]

“While we were banned, it was our biggest hit in America and I sing it in a London accent. It was Dick Van Dyke London. Americans still think of us as being slightly Mary Poppins.

“The gardener in Autumn Almanac used to clean up leaves in the back garden. His name was Charlie and he had a hunchback. I made up a mystical world of all these characters.”

Hence we also have lovers Terry and Julie . . . “as long as they gaze on Waterloo Sunset, they are in paradise”.

The words of Davies’ most celebrated song flow on for ever in our hearts, just like the “dirty old river” Thames, which keeps “rolling into the night”.

Does he think it’s his best song? “The one I’m writing is the best,” he replies defiantly.

“But I have a wonderful feeling for Waterloo Sunset. What amazed me when I heard it recently is how simple it is, acoustic guitar, bass and drums and, only at the end, does the piano come in.”

Despite the iconic hit’s enduring appeal, his most comprehensive attempt at getting under the nation’s skin with wit and wistfulness reaches 50 this month.

Arthur (Or The Decline And Fall Of The British Empire) is being celebrated with a beautifully curated box set, a veritable treasure trove loaded with previously unreleased material.

‘WHY NOT MAKE A WHOLE STORY?’

Not as well-known as other 1969 LPs such as Abbey Road, Let It Bleed or Tommy, Arthur more than holds its own in such lofty company.

Yet Davies remembers The Kinks’ career “was quite uncertain at the time. We were working in the studio, headlining shows, doing tours but we were deprived of America.

“I was also trying to get away from doing singles. Why make an album if it’s only going to be three singles and fodder?

“So I thought, if I’ve got 50 minutes of plastic to cover, why not make a whole story?”

Arthur is closely linked to previous album The Kinks Are The Village Green Preservation Society, as Davies explains: “One project overlapped the other. Village Green is a fantasy about loss of youth, loss of innocence, while Arthur is more a black-and-white documentary.”

It focuses on the impact of troubled times on a working class family and still resonates with Britain’s challenging situation in 2019.

Yet it still comes over as a vibrant, inventive confection of power pop, lyrical ingenuity and music hall singalong including Victoria, Drivin’, Australia, Shangri-La and Mr Churchill Says.

The band, consisting of Ray and Dave, Mick Avory (drums) and new bassist John Dalton, were on fire, tight knit and fluid.

“I found some old rehearsal tapes at my house and I was amazed by how good the band was,” says Davies.

“We’ve included them on this boxset. Some Mother’s Son sounds like a gravelly old blues band trying to sing a ballad.”

The songs were intended to soundtrack a Granada TV play but Davies reports: “It got canned. The producer fell out with the production company.”

In a wonderful twist, he and playwright Paul Sirett have turned Arthur into a new audio drama for Radio 4 (November 2, 2.30pm), “a story set yesterday about all our tomorrows”.

‘THE WHOLE FAMILY FELT IT’

“There’s an eerie connection with now,” says Davies. “Arthur felt trapped and lots of people in this country feel trapped.

“They have no voice, they don’t live in London and they don’t have access to all the right media. It’s a pop-up society and pop-ups only give you limited information.”

The Arthur story is about a disillusioned couple who turn their back on post-war Britain and take up an offer to start new lives in Australia.

Because they only have to pay £10 a head for processing fees, they are among the so-called Ten Pound Poms.

Though presented as fictional characters, they are based on Davies’ sister Rosie, one of his six older sisters, and her husband Arthur Anning, who emigrated in the Sixties.

Their departure had a profound and devastating effect made clear in Kinks song Rosy Won’t You Please Come Home.

“The whole family felt it, my mother particularly,” says Davies. “Rosie was like a Forties film star. Beautiful for that time, like Joan Fontaine.

“Most of my sisters were usherettes at Muswell Hill Odeon and they would tell me stories of coming home in the air raids.

“Rosie was in her twenties when I was born and I lived with her for a while. I missed her because she was like a surrogate mother to me.

Davies remembers Rosie living in “quite a nice house just down the road” in North London where he marvelled at the Queen’s coronation on Arthur’s nine-inch television.

So what were his impressions of the bloke his sister fell for, who inspired The Kinks’ seventh studio album?

“Poor old Arthur,” responds Davies, considering this upstanding member of society, who served his country in World War Two. “I think he’s one of the forgotten masses.

“He was an enigma, just a plain, ordinary man, working class. I’ve always been attracted to those characters, the silent majority.

“Arthur felt betrayed like so many servicemen after the war. I got a feeling of despair from him because he thought that what his generation fought for was being lost.

“It all seemed good when the NHS started but he saw the future and that’s why he had to get out.

‘PUNCH-UPS WITH VARIOUS OTHER BANDS’

“You couldn’t help being aware of his political stand of wanting change. It was the servicemen who voted Churchill out.”

Arthur, believes Davies, convinced himself that Australia offered him, his wife and son Terry a better life.

He was driven by the thought of getting away from “the old boy network” and the prospect of “limited advancement” for being on the outside.

Davies was worried about basing his main character on Arthur, his fears coming to a head when The Kinks toured Australia and his sister and brother-in-law appeared backstage.

“Arthur took me to one side and said, ‘I heard the album you wrote about me and I liked it’. That was a relief.

“I’d been through a few punch-ups with various other bands. I thought he was going to clobber me. But he made a loving gesture.”

Of the songs on the Arthur album, the upbeat opening track Victoria has strong family connections to Davies of a different sort.

He says: “My daughter was born on Christmas Day just as I was just finishing Victoria. She’ll probably hate me for saying it but I named her after the song.

Davies pictured at the Q Awards in 2016[/caption]

“When she became an adult, she changed her name by deed poll, saying, ‘I’m not going to be named after one of your songs’. But I still call her Tor and she loves it now.”

Some Mother’s Son reflects on the futility of war and appalling sacrifices made. “I was trying to write about death and make it sound beautiful, not maudlin,” says Davies.

“It’s about the anonymity of being killed and becoming just another statistic. I find that offensive – every grave, First World War or Second World War, should have a name.”

The song also dwells on the pettiness of conflict, “and we’re still fighting a war in a sense, this time about doing a deal. 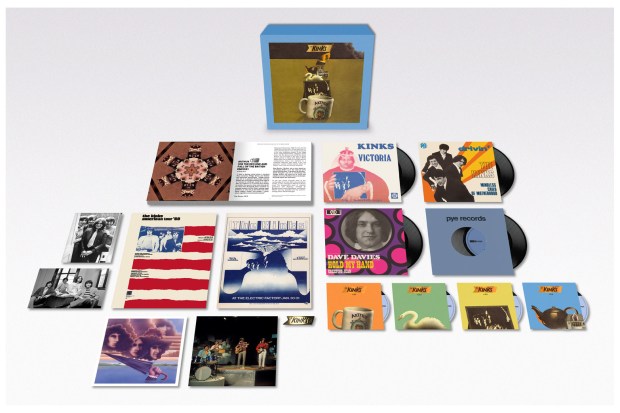 “But I won’t say the B-word, the most overused word in the vocabulary,” he sighs, his view of our current political turmoil being echoed up and down the land, I’m sure.

Before Davies and I go our separate ways, I have two last questions for him.

Is he pleased The Kinks are seen as an inspirational band by acts that came in their wake like The Jam and Blur?

“It’s flattering,” he answers. “They saw something in us worth being inspired by.”

MOST READ IN MUSIC


How old is Skepta, what's his net worth and who is he dating?

this is not a drill


What is drill music and where did it come from?

And what’s his next project? “I’ve got this mad idea to do an opera, my kind of opera. It will have a groove.”

After a friendly handshake, Sir Ray Davies makes his way out into Waterlow Park, sadly not at sunset.

‘Neo-Nazi’ soldier, 27, who ‘recruited for hate group’s “race war”‘ arrested with two others ahead of Virginia gun rally

Arsenal acted like a ‘pub team’ in allowing Pepe to take crucial penalty over...