Trump impeachment debate heats up ahead of vote | News | DW


Democratic members of the US House of Representatives on Wednesday began debating the impeachment of US President Donald Trump on accusations he was responsible for inciting a mob of supporters that stormed the Capitol Building last week.

After the debate concludes, the Democrat-controlled house is expected to vote and pass the article of impeachmentby Wednesday evening, which would make Trump the first president in US history to be impeached twice. He faces a single charge of “incitement of insurrection.” 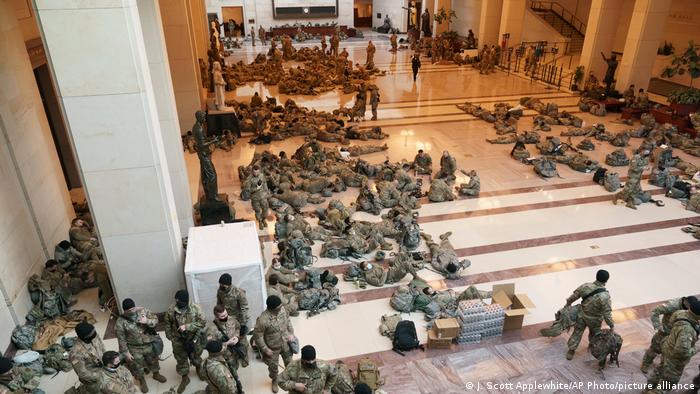 Democrats rushed forward to launch the impeachment vote with only seven days left in Trump’s term after Vice President Mike Pence rejected calls to remove Trump under the 25th amendment.

If passed in the House as expected on Wednesday, the article of impeachment would then head to the US Senate, still controlled by the Republican Party, which is set to conduct a trial on the charges. A two-thirds majority is needed to convict Trump on the charge.

What do the Democrats say?

Ahead of the vote, Democrats made arguments in the House chamber for impeaching President Trump.

House speaker Nancy Pelosi of California said “we know that the president of the United States incited this insurrection, this armed rebellion. He must go. He is a clear and present danger to the nation.”

“We are debating this historic measure at an actual crime scene and we wouldn’t be here if it weren’t for the president of
the United States. This was a well-organized attack on our country that was incited by Donald Trump,” he said, adding that Trump “instigated an attempted coup.”

“If this is not an impeachable offense, I don’t know what the hell is,” said McGovern.

Democrat Sheila Jackson Lee of Texas called Trump an “insurrectionist,” and her Texan colleague Lloyd Doggett said “we stopped the steal, we stopped Donald Trump from stealing our democracy and imposing himself as a tyrant.”

Where do the Republicans stand?

At least five House Republicans have joined Democrats in supporting impeachment, including Liz Cheney, a member of the Republican Party leadership team.

“The president of the United States summoned this mob, assembled the mob, and lit the flame of this attack,” Cheney said in a statement released Tuesday.

“There has never been a greater betrayal by a president of the United States of his office and his oath to the Constitution … I will vote to impeach the president,” the statement continued.

Other Republicans made speeches to urge the House not to impeach Trump in the interest of “national healing.”

“Instead of moving forward as a unifying force, the majority in the House is choosing to divide us further,” Oklahoma Republican Tom Cole said on the House floor. “Let us look forward, not backward. Let us come together, not apart.”

What is the security situation at the Capitol?

Washington DC has been on high alert since the unrest in the Capitol Building on January 6.

Authorities have said potentially violent protests are anticipated in Washington in the days leading up to President-elect Joe Biden’s inauguration on January 20.

As lawmakers debated impeachment Wednesday, hundreds of armed national guard soldiers were stationed in the Capitol Building, with many camped out in the Rotunda.

High fences were erected around the Capitol grounds, where armed National Guard patrolled the perimeter.

Mexican authorities have opened an investigation following the discovery of 19 burnt bodies in several vehicles in the town of Santa Anita, close to the US...
Read more
News

German Health Minister Jens Spahn has warned against assigning blame during the coronavirus pandemic following growing criticism of the country's vaccine shortage. "We should be...
Read more
News

Mexican authorities have opened an investigation following the discovery of 19 burnt bodies in several vehicles in the town of Santa Anita, close to the US...
Read more

'Everyone knows what Zidane means to us': Real Madrid director Emilio...
Read more

Conor McGregor shows off his busted leg that was the size...
Read more

While it should be a source of embarrassment for the PM that his deal has made life very difficult for many of the...
Read more

Mexico finds 19 charred bodies in vehicles near US border |...